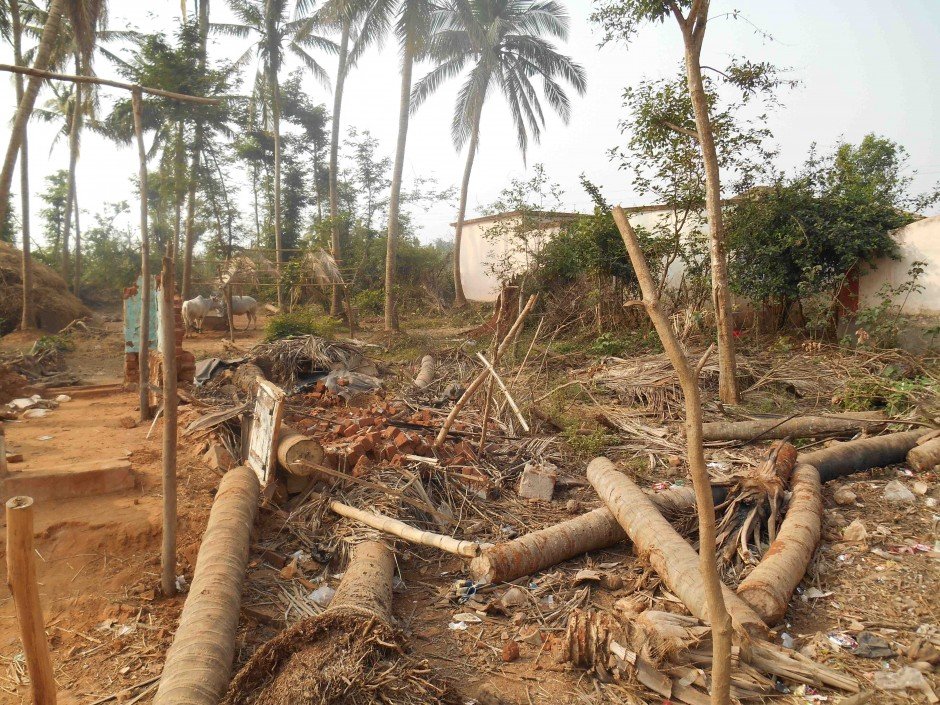 Approximately five kilometers inland from Gopalpur on the Odisha coastline lies a village where Cyclone Phailin, the second strongest cyclone in India’s history, made landfall. At the local level, government, media, NGOs, and community relief efforts were apparent and a need for recovery work still evident. Government: The government played an active role in notifying the community of impending dangers via television broadcasts, and villagers were therefore able to move to a university campus nearby to seek shelter. Immediately after the cyclone struck the community, the government provided each household 500 rupees, 50 kilograms of rice, lentils, and other basic supplies. Furthermore, the government provided tarps to cover houses and provide shelters. After conducting a survey to determine the needs of the community, the government provided grants to villagers to rebuild their homes in amounts of 1900 rupees toward partial reparations, 3200 for major repairs, and 17000 rupees for demolished homes. Community: About 200 households, 195 of which belong to scheduled tribe/caste population, comprise the village. Immediately after the disaster, this tight-knit community got together and started clearing local roads and helping each other rebuild their homes. An active community leader ensured an even distribution of relief supplies as well as ensured the supplies reached those in need. NGOs: Having an established organization on the ground is critical prior to any disaster. The NGO needs to gain trust of the organization. The local NGO in partner with other NGOs distributed some robust tarps and other immediate supplies, such as buckets, soap, and mosquito nets. The second village was in close proximity to the first, and was also comprised of scheduled tribe/caste community members. The members work as day labors and seemed physically fit. The men earn 180 rupees a day while the women earn 130. It was observed that the decision-making was male dominated, and  the entire village seemed to segregate themselves according to gender, with men sitting on one side of the congregation and the women on the other. Government: A government officer (mandal level) announced warnings to the community of the impending cyclone. The local media also broadcasted plenty of warning about the cyclone. Given this information, the villagers moved the elderly and disabled community members to safer grounds two days prior to the cyclone landfall. Post disaster, it was discovered four or five pukka houses had collapsed. The government provided financial compensation and food supplies;  however, despite a government officer surveying and assessing the damages, no financial relief, which are sent directly to citizens’ bank accounts electronically, had been received as of writing this post. There was no anticipation of the floods that followed the cyclone, and it took about one month for electricity to be restored to the community. Community: Importance of a viable leader and the ability to communicate to outside stakeholder is evident.

Role for IDS: All plantations were wiped out, as shown in top photo. We had discussion with the community to determine their needs. There is potential to support this village in its recovery efforts by providing seeds and saplings for various types of vegetables and fruit bearing trees. For about 1000$ we can help 200 households totaling more than 1000 citizens.
Share On:
Previous Post

A Few Words from Our President