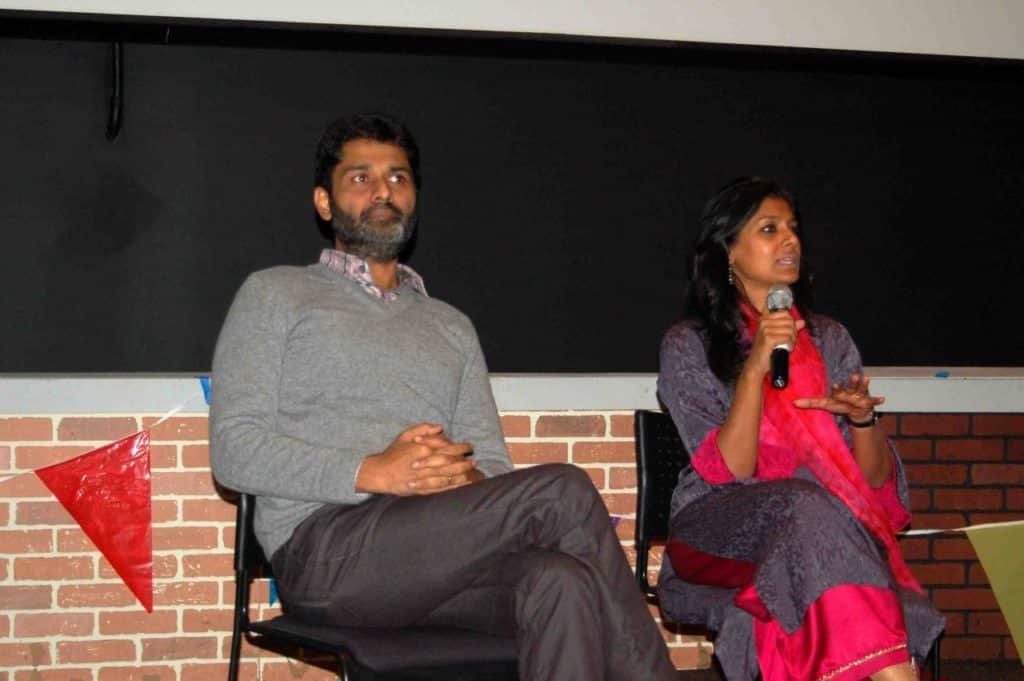 IDS has a long history of bringing new and unique events to Chicago that have social relevance beyond entertainment.  In continuation of our 40th anniversary celebration, IDS hosted the screening of Between the Lines, a film that examines gender equality in contemporary India. Actress and activist Nadita Das and her husband Subodh Maskara wrote, produced, and starred in the cineplay.

Set in contemporary India where educated and affluent couples are caught between modernity and tradition, the cineplay explores the relationship between a husband (Maskara) and wife (Das) who are both lawyers and who have been married for ten years. They end up arguing on opposite sides of a criminal trial, resulting in the blurring of their personal and professional lives. The battle in the court starts to impact their relationship at home, and they struggle to find a new balance.   “I am delighted to share with you, a new form of art—cineplay, a cinematic way of capturing theatre. Thanks to IDS, Vachikam, and CSAFF, we will be able to reach out to the audiences of the windy city of Chicago. Between the Lines was our first cineplay and truly a labor of love for the team, so I feel fortunate to be able to share it with all of you,” stated Ms. Das.   Nandita has acted in more than 40 feature films (including Earth, Fire, and Before the Rains) in ten different languages. She made her directorial debut with Firaaq in 2008, and Between the Lines marks her debut as a playwright and theater director. She is a major advocate for issues of social justice and human rights. In 2011, Ms. Das was the first Indian to be inducted into the International Hall of Fame by of the International Women’s Forum. Currently, she is a World Fellow at Yale University in New Haven, Connecticut.

It was a privilege to have K. Sujata, CEO of Chicago Foundation for Women, moderate engaging question-and-answer sessions with Nandita Das and Subodh Maskara following the screenings. The screenings were a tremendous success and attended by sold-out crowds in Naperville and at Facets Media in Chicago.
Share On:
Previous Post