IPCA Initiative: Even We Use Waste Bins 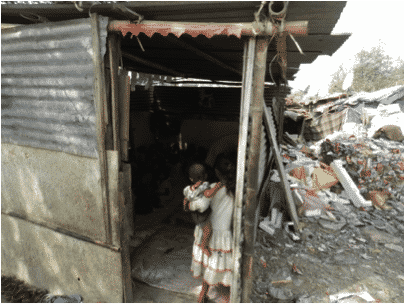 IPCA (Indian Pollution Control Association) operates five schools in the Rag Pickers’ Children’s Education Programme. All the schools are situated in the same location (a godown, or warehouse) where the rag pickers’ job is to segregate waste. In the godown, waste is scattered everywhere–inside the school and out! Ironically, the waste created by the children and teacher was often thrown directly outside the classroom, where it would end up in the waste dumps.

IPCA recently introduced a new initiative to encourage cleanliness: a waste bin in every school. An observer may think, ”Why is there a need for waste bins if the school itself is in the waste segregation campus?” This is a valid question. Surprisingly, IPCA has found that waste bins in the schools have multiple benefits.

First of all, the presence of a waste bin contributes to a culture of neatness and cleanliness in the school through proper disposal of waste. It is a reminder to children to throw waste only in the bins—not on the floor of the classroom, for example. Children learn quickly that waste has its place. Students learn by example to us

e the waste bins, and the result is a clean and beautiful school environment. Using the waste bin helps instill a sense of responsibility in the children. The habit of proper waste disposal also helps in the teaching of proper hygiene. Finally, the waste bin initiative spreads the message that to keep ourselves healthy, it’s necessary to keep our surroundings clean. When the waste bins were first introduced in IPCA’s schools, children would, as before, throw the waste anywhere they wanted. But with repeated reminders from teachers, the children began to use the new waste bins. The example set by older children and teachers has been powerful. Now, the new students—and even the smallest children—use the waste b

ins without prompting. Though these achievements may seem trivial, this small initiative is contributing to the larger goal of Swachh Bharat Abhiyan (the Clean India Mission) launched by Prime Minister Narendra Modi in October 2014. In Modi’s words, “A clean India would be the best tribute India could pay to Mahatma Gandhi on his 150 birth anniversary in 2019.”
Share On:
Previous Post

Scenes from Student Life in Indirapuram